IBIS was founded way back in 1981 by Scot Nicol (He is also known as Chuck IBIS and that’s a whole other story…). You can read a note from Scot/Chuck below. There are four partners in IBIS Cycles, Scot, Hans Heim, Tom Morgan and Roxy Lo, or five partners if you count both Scot and Chuck.

IBIS, has been singing the praises of carbon fiber bikes for a long time. They made their first carbon fiber bikes back in 1989. IBIS founder Scot Nicol wrote about carbon in a widely read series of articles on bicycle metallurgy that appeared in VeloNews in the early 90’s. Technology has come a long way since then and IBIS is embracing the latest that carbon technology has to offer.

All IBIS Bikes and frames are engineered around the philosophy that you can design a lightweight bike that's forgiving, stiff, responsive, dependable and most of all...... sexy!  All IBIS frames are built with state of the art carbon fiber.  Why does IBIS choose carbon fiber for all of their bicycle frames yo might ask?  Well the answer is rather simple.  For years, bicycle manufacturers have been trying to create laterally stiff and responsive frames from alloys and other materials, but the downside of metal based stiff frames has always been the transferer / amplification of road and trail vibration through the frame into the rider.  For years, if you wanted a frame with damped vibration, you had to give up stiffness and your bicycles responsiveness would suffer.

This is where carbon fiber comes into play, and exactly why IBIS Bikes has make carbon fiber the choice material for each & every one of their bicycle frames.  Carbon fiber has a very unique characteristic in that it's not only one of the stiffest materials on earth, but it's ability to dampen road and trail vibration is absolutely unseen by any other material around.  This means that every IBIS bicycle is incredibly lightweight, stiff, responsive and does a phenomenal job of absorbing vibration, which means you as the rider are comfortably in complete control of IBIS bicycle every moment that you're riding!  Make your next bicycle purchase an IBIS...... you won't be disappointed! 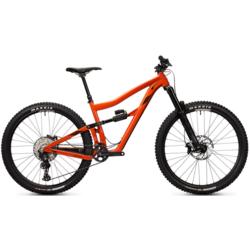 Ibis Ripmo AF
$3,499.99 - $4,399.99
The Ripmo AF (Aluminum Frame) brings the award-winning performance of the carbon Ripmo to a wider, rowdier audience. It’s everything we love from the carbon Ripmo, plus a few tweaks. Over our long tenure from moun­tain biking’s awk­ward ado­les­cence to its cur­rent any­thing-shred­dy era, we’ve exper­i­ment­ed with steel, alu­minum and tita­ni­um?—?remem­ber the Bow-Ti, the first super­bike? We remem­ber the met­al times too, and it feels good to offer a pre­mi­um ride expe­ri­ence to our broad­en­ing fam­i­ly of rid­ers, cour­tesy of durable, afford­able alu­minum alloy. With a steep, 76-degree seat tube angle and a rangy but not stratos­pher­ic reach, the Rip­mo AF places rid­ers cen­tral­ly and upright over the bot­tom brack­et. It makes for an effi­cient posi­tion that can go the long haul with­out plac­ing too much weight on its slack, 64.9-degree head­tube angle. A 44mm reduced-off­set fork is more sure­foot­ed on steep descents and stead­ies high speeds. Bet­ter up, bet­ter down. 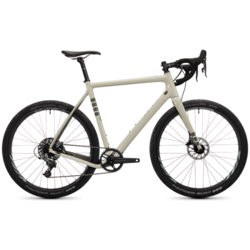 Ibis Hakka MX
$3,699.99 - $4,799.99
The Ibis Hakka MX Disc, while technically a cyclocross bike, has always been much more. It’s been ridden on road centuries, on epic dirt rides surrounded by others on mountain bikes, and in local underground races. Some of the best rides involve a bit of road and a bit of dirt. And it’s successfully raced cyclocross—quite a few races at that. With its rainbow-striped pedigree, the Hakkalugi offers superb handling and a perfect fit, thanks in part to its carbon construction, 142x12mm rear spacing, and a tapered steerer. Up front, carbon continues to lead the way with Enve's beautiful and insanely strong thru-axle ’cross fork. There's room for fat tires, too—the frame and fork clear knobby 38mm-wide tires with room to spare for mud. The main highlight of this build is the SRAM Force 1 x 11-speed Rival groupset, which offers better chain management and smooth shifting no matter what the conditions or terrain. The Shimano mechanical disc brakes let you scrub your speed with ease across all weather conditions and through the most precarious courses. Your cross races will never be the same. 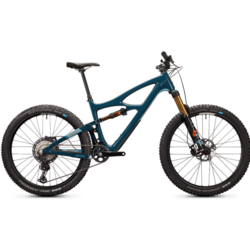 Ibis Mojo
$5,199.99 - $11,599.99
The word Mojo refers to a magic spell or charm, and more broadly - a magical power. Since its introduction in 1994, the Mojo has delivered a wicked combination of fun and all-mountain prowess. The Mojo V4 fea­tures a 76.6-degree, get-you-up-that-hill seat tube angle, our short­est chain­stays, and a spa­cious reach with a 65.4-degree head­tube angle. This enchant­i­ng com­bi­na­tion rolls on 27.5” wheels, to deliv­er that hov­er­bike feel with on-trail confidence. Since 2005, we’ve part­nered with sus­pen­sion guru Dave Wea­gle on the dw-link sus­pen­sion plat­form. It pro­vides an unpar­al­leled com­bi­na­tion of climb­ing effi­cien­cy and down­hill per­for­mance, which has been proven repeat­ed­ly at the high­est lev­els of racing. 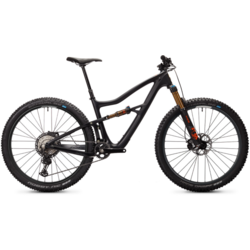 Ibis Ripley (Carbon)
$5,199.99 - $11,599.99
The Ripley is our snappy, flickable, playful, fast, lightweight, and versatile 29” trail bike. Its combination of modern geometry, a stiff lightweight carbon chassis, and 120mm of ultra efficient dw-link travel, means it’s equally happy popping off bonus lines as it is crushing all day epics. With its well bal­anced mod­ern geom­e­try, the Rip­ley is ready for any adven­ture. The long front end, slack head angle, and short rear end gives you the con­fi­dence to try new lines, while the steep seat tube angle and short­er off­set fork makes it easy to maneu­ver tech­ni­cal climbs and flowy singletrack. Since 2005, we’ve part­nered with sus­pen­sion guru Dave Wea­gle on the dw-link sus­pen­sion plat­form. It pro­vides an unpar­al­leled com­bi­na­tion of climb­ing effi­cien­cy and down­hill per­for­mance, that has been proven repeat­ed­ly at the high­est lev­els of racing. 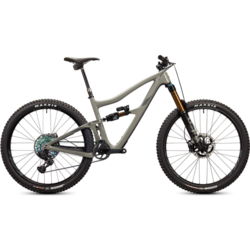 Ibis Ripmo (Carbon)
$5,399.99 - $11,799.99
What if we took everybody’s favorite bike and made it a little slacker and little longer? Hell, what if we made it more progressive and coil compatible? And that’s exactly what we did for the Ripmo V2. Active ingredients include: 29” wheels, berm-defying cornering tendencies, and a love for long rides. The Rip­mo and Rip­mo AF share the same steep, 76-degree seat tube angle and a rangy but not stratos­pher­ic reach, which places rid­ers cen­tral­ly over the ped­als. It makes for an effi­cient posi­tion that can go the long haul. The slack 64.9 head­tube angle and 44mm reduced-off set fork doesn’t wan­der while climb­ing, and doesn’t hold you back descend­ing. It works?—?all day up, all day down, all day in between. Our cus­tom tuned front and rear sus­pen­sion fea­ture extra light high speed com­pres­sion and rebound damp­ing to deliv­er unpar­al­leled trac­tion. This allows the wheels to flut­ter through ter­rain like a tro­phy truck storm­ing through a set of whoops. 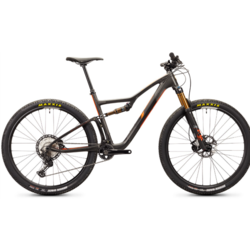 Ibis Exie
$7,999.99 - $12,899.99
The Exie is a World-Cup capable cross-country race bike that flat out shreds. With a sub 2,000g frame weight and dw-link suspension, it offers a stunning combination of pedaling efficiency and downhill performance. We designed, built, and test­ed it in our Santa Cruz factory, which is pow­ered by the warm Cal­i­for­nia sunshine. We build each Exie in our North­ern Cal­i­for­nia fac­to­ry. This gives us the utmost con­trol, which enable us to hit remark­able frame strength, stiff­ness, and weight tar­gets for this frame. Learn more about the process. Whether you’re rac­ing short track or on a mul­ti day epic, the Exie’s seat tube angles allows you to har­ness your strongest mus­cles, while reduc­ing any poten­tial knee or wrist strain. We’ve also steep­ened the seat tube angles as the frames get larg­er, to allow rid­ers with dif­fer­ent inseams to achieve the same rid­ing positions.
Page 1 of 1